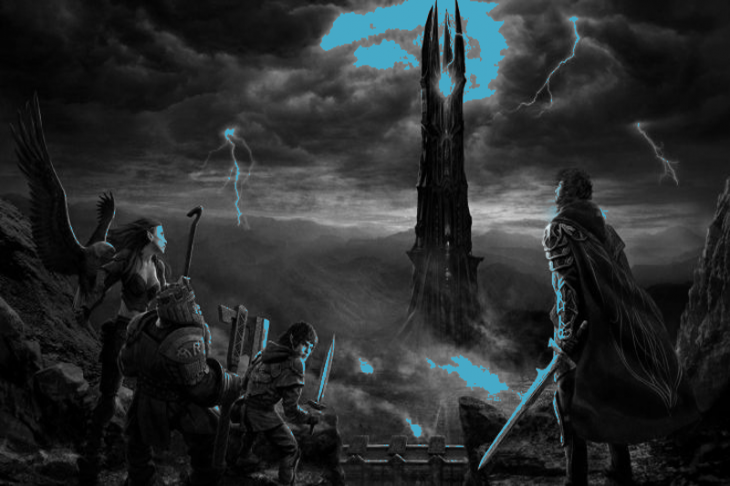 Your interest or hatred for this movie depends on whether you like the old animations or not. This film tells the story of the Lord of the Rings. But this time in the form of animation.

But do not worry, the fight and action scenes of this animation are not few.

This movie has everything that a good adventure movie should have. A charming hero on a mission to rescue a princess, fighting and meeting fantasy animals and monsters and a very vivid negative character played by Tim Kerryon the way to this mission.

Like the Lord of the Rings movie, a fantasy world is created. In a world full of mysterious creatures, a young boy goes on a mission to find a star beyond the massive walls that surround the city.

During his mission, he encounters witches and princes that make his mission exciting. He also meets a pirate played by Robert De Niro.

On the twelfth position of the movies similar to lord of the rings is dark crystal .depicts fantasy lives on a distant planet. where its residents decide to start a mission to find a black crystal that saves their world.

A dwarf like The Hobbit inadvertently gets involved in a mission to save a child’s life. During this epic story, there are many clashes with creatures such as giants and goblins.

This 1984 adventure is taken from a famous and successful fantasy book. In addition to reality, this beautiful book also exists in its own created world and is mentioned there. Like Lord of the Rings, this movie has a variety of races and fantasy kingdoms similar to goblins and orcs.

This novel was written by a teenager in his time. Despite the criticism of the novel, the film was a success. The atmosphere of this novel is a combination of epic and fantasy. Like The Lord of the Rings, this movie is a world of fantasy combined with a sword and a bow. That an evil empire is trying to destroy the good lands.

the eighth position of the movies similar to LOTR is the kingdom of heaven.This may be the only film of this list that has no imaginative elements in it. The subject of this film is related to the Crusaders and the Middle Ages, when the Egyptian Fatimids, led by Salahaddin Ayoubi, set out to recapture Jerusalem out of crusaders’ hands. If you are obsessed with attacking cities and castles, campaigns, and battles. This movie also satisfies you a lot. The castle invasions in this movie are very similar to Lord of the Rings.

This film is the only comedy and epic film on this list. Another feature of Lord of the Rings movies is the funny dialogues of this movie. comedy dialogues that add a touch of humor to the film’s epic atmosphere are the LOTR-elements that this film has.

Maybe it’s weird why a children’s animation should be on this list. But remember the fantasy elements and the theme of polytheism. Evil Witch in Fairy Shrek 2, Dragon, Far Far Away Castle invasion in Shrek 2… are all familiar scenes, arent they?

Compare Emperor Palpatine and Darth Vader with Saron and Saruman. Doesn’t the empire of their galaxies have the same elements as the empire of the orcs? It is true that Star Wars has a sci-fi atmosphere. It is true that the film takes place on galaxies and planets. But Star Wars and the Lord of the Rings are more like each other.The existence of an evil empire, Two powerful and evil leaders, Sword battles, The fall of an empire at the hands of a heroic teenager and…. are all similar elements between the two movies.

On the fourth position of the movies similar to Lord of the rings is The Wizard of Oz.Perhaps in this list, along with Harry Potter, this title is also considered a masterpiece in literature.Like Lord of the Rings, the Wizard of Oz has been regarded as a fantasy masterpiece for many years. Which has been filmed twice as a movie. An evil sorcerer (like Saruman) who falls by a young hero. An adventure team to suppress the evil government of Oz and… .makes this film similar to lord of the rings.

It is safe to say that the Harry Potter series is one of the most popular movies on this list. This beautiful story by JK Rowling, like The Lord of the Rings, is a fantasy masterpiece followed by many fans. Gondolf the Gray and Dumbledore are not only very similar in power But also have a similar appearance! (Perhaps the only difference between the two is the size of the magic wand and that Gandolf smokes a pipe). The main protagonists of the films are both teenagers. There is an evil sorcerer with as powerful as Dumbledore, named Voldemort, who can resemble Saruman. also, the hoaxes resemble the ring in lord of the ring, which by destroying both of them an empire falls.

2- the chronicles of narnia

Warcraft is without a doubt most similar to the Lord of the Rings stories. In addition to the beautiful and popular story, strategy, and online games, a movie has recently been added to the Warcraft collection. The Orcs invasion to the land of humans, the existence of elves and dwarves, an evil sorcerer named Guldan, who is not unlike Saruman. An evil lord named Sargeras who rules the whole sinister empire and etc.are considered one of the Lots of elements of magic and sorcery that connects these two fantasy movies.If you enjoyed The Lord of the Rings story, the Warcraft story is most similar to The Lord of the Rings.