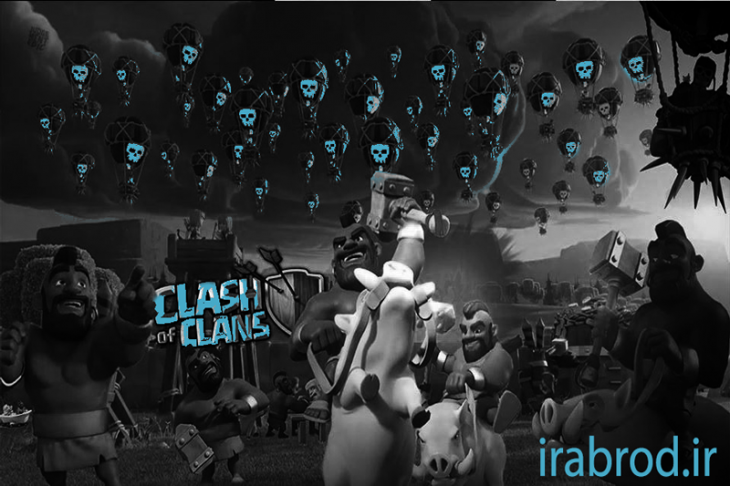 Like Clash of Clans, you have to build your base and government, upgrade your walls and soldiers, and go to war with other players. The atmosphere of the game is similar to the game of thrones.

Your army can be a combination of humans, animals, myths and imaginary creatures. Each has its own special abilities to attack or defend. You can follow the story of the game as a single player or compete online with other players.

Form an alliance with other players and use them to go to war with other alliances and make your empire bigger and stronger day by day. The battles in this game are running very fast, so it is better to be a little more careful. With 100 million players around the world, your mission to bring your empire to power is very challenging .

18-Battle for the galaxy

Imagine a Clash of Clans game in which soldiers and buildings have are machines and in modern era. In this game, your troops and the enemy are made up of missiles, planes, robots and tanks.

This game has a complex and interesting style, you can upgrade more than 50 heroes with their special soldiers to defend the base you have built or attack other bases. This game has more than 10 pvp and pve modes

In this game, there is a medieval atmosphere, in this game you have to form your own government by building special buildings, defensive towers, and soldiers who each have their own special power. Your other mission is to increase your power by conquering new lands and expanding your territory and defeating other players.

In this game, you have to choose an island and build  special building. You can attack other islands by sea, this game requires a lot of thought and strategy. Each island you occupy gives you new privileges and technologies.

A game in the style of Clash of Clans , but with different kinds of battle mods, you can fight with your ships at sea, you can attack other players’ bases with your soldiers, or you can bomb it with helicopters and planes. Don’t miss this beautiful game.

If you are interested in both Star Wars and Clash of Clans, this game may be the best option for you. In this game you have to upgrade your colony, and then build your army with Star Wars characters, then attack other colonies.

Another game in the style of Clash of Clans, but with the technology and modern weapons of today’s world. In this game you have to build a modern military base and use it to compete either alone with the terrorist army or online with other commanders.

In this case, you have a very easy task, you have to form the Roman Empire. To achieve this goal, you can use a variety of soldiers from the Roman Empire, Egypt and.. Of course, the mythical creatures of Greece, Rome and Egypt also help your army.

In this game with very beautiful graphics, you have to build an island floating in the sky, strengthen and upgrade an army of air forces then use it to both defend your island and attack others. The game’s high graphics make battles and attacks very attractive.

A very beautiful game that is similar to both rise of nations and clash of clans. You have to guide an ancient civilization through time, by researching and discovering new technologies using science, this feature has made it possible for you to destroy army of archers by your tanks. In this game you can build wonders too.

The tropical forests are full of gold and oil, which is why so many generals (other players) come to the area. You have to try to win the eternal battle between the rest of the generals and native people of those forests to get the most profit you can.

This game is a combination of the popular game of age mythology and clash of clans. In this game, you have to build a city and appoint a Greek god to defend your city using its powers and myths and attack the city of other players.

The world is collapsing and Peace has been destroyed by an evil and ambitious force. Now the world is divided into many alliances and tribes that are always at war. At this time, you must use the Marvel and DC superheroes to form a unified empire in the world so that you can restore peace and order to the world.

There is only one city left of humans, and the evil forces intend to destroy it by anyway they can. With the help of a team of superheroes of your choice, you must save your city from the onslaught of foreign forces in order to save the human race from extinction.

A game similar to Clash of Clans, but in the atmosphere of the samurais and ancient Japan. In this game, it is more important than anything else to unite with other players to form an alliance, to form bigger and bigger empires.

In this game, you can experience both tower defense and dynamic battle. You need to build a military base that can defeat all kinds of enemy air, naval and ground forces attack .

2- Empire at war: battle of nations

Build a strong country, and conquer rivals. Get enough resources to upgrade your technologies, but make sure other players attack your country many times to plunder your resources, so make a great defense and offensive strategy.

A game like clash of clans where you have to build your city. Upgrade your buildings, heroes and soldiers and compete with other cities and players. In the meantime, there are special and magical cards that give you special abilities so that you can overtake in this competition.

12 games in the style of stronghold crus...
top 20 beat 'em up games of all time, be...
how many books or movies of harry potter...
How to make android and apple batteries ...