successful simpsons predictions that came true : The events predicted in the Simpsons animation are not a few numbers. For this reason, we have divided the interesting facts of Irabrod into two parts. Undoubtedly, The Simpsons is one of the most successful cartoon series in the world, which has been playing for more than 30 years. But these predictions have made this cartoon series extremely mysterious. There is a question, how did they know that such incidents would happen some day?

what animal year is next year ?

top 20 beat’em up games ever

number and names of harry potter books in order

In season 20 episode 4, the US presidential vote is taking place between Obama and McCain.they used voting machines to count people’s votes.  And when the Simpsons in this car choose the name, Obama. The vote is registered for McCain. The same thing will happen in the real world years later, and exactly at the end of the Obama election. This machine is identified and removed from voting.

In this episode, an employee uses horse meat to prepare a variety of snacks for Springfield High School. A few years later, a taco shop is reprimanded for the presence of horse DNA in taco meat. This animation takes place in Season 5, Episode 19 .

Yes, this was predicted in Season 11 Episode 17 of The Simpsons. That is, years ago. This episode shows Trump becoming president and drastically changing the US economy.

Before the first auto-repair is applied to the keyboards of Apple phones. In one of the Simpsons animations, this exact action is also displayed on an Apple phone. Chapter 6 Episode 8 .

A two-person drama group is formed by Ganfield and Ernest, who control the theatrical movements of a white tiger but in one day the team is attacked by their own tiger during the show.

on the 4th place of successful simpsons predictions is bloody billboard. In Season 4, Episode 6, there is a billboard of a cat that spills its fake blood on the surrounding roads as a result of the blow it inflicts.

Years later, a billboard from the action movie Kill Bill is placed in the streets, with her sword spilling fake blood on the streets and parked cars.

3- The secret of American statesmen

season 10 episode 2. The Simpsons intend to invent something. And that makes them want to solve a very complex formula. Years later, it becomes clear that this is exactly the formula for determining the mass of the element of the universe from which everything came to existence. yes the formula of higgs boson.

Chapter 4 Episode 21 means many years ago. This phenomenon, which we are dealing with in 2020, was predicted in a comedy cartoon. Of course, with one difference. The origin of the virus is the opening of export boxes. But the symptoms of the virus were similar to the flu, and the global epidemic, and that there was no cure, all of these symptoms of covid 19 was predicted in the Simpsons.

statues caught moving on camera : The sculptures that moved on their own? Is it possible? a sculpture is basically a hard and lifeless body of art that is impossible to move without electricity. But Read more… 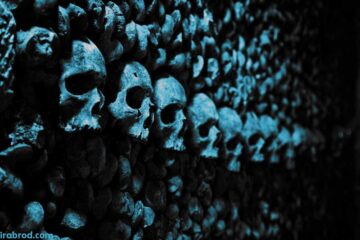